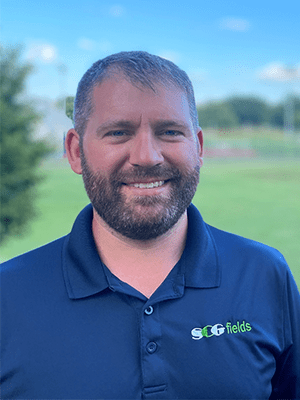 Chris began working as a laborer and built his first sports field in 2002 at his high school. He developed a passion for sports construction after learning the intricacies of building a field and then getting to play on it. From there, he joined a traveling crew during the summer months while completing high school and college. Chris earned degrees in Business Finance and Business Management from Loyola College in Maryland. He worked as a project engineer at Whiting-Turner Contracting Company in Baltimore, Maryland from 2007-2008. Rejoining the company in 2008, his experience in the construction industry has played a major role in the successful completion of multiple major projects, one of which being the New York Yankee’s new stadium where he was the project superintendent. Currently, Chris is the Executive Vice President and manages all sales, estimating, construction, project management, and customer service teams. Chris is a member of the American Sports Builders Association and the Sports Turf Managers Association. He is a Certified Field Builder recognized by the ASBA. Chris is a minority owner of the company.
Welcome to SCG Fields